You are here: Home / Windows / A Brief History of the Window 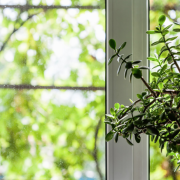 Take a look at your windows. Have you ever thought about how they came to be?

Now, we’re not talking about the manufacturing process of these windows. We’re not even talking about how these specific windows were chosen and installed in your home. Instead, we’re referring to the history of windows, and how they evolved into some of the most essential parts of a building.

If you’re like most people, it probably hasn’t crossed your mind. Windows, after all, are such a normal part of our daily lives; it’s easy to overlook its origin and background.

So, let’s discuss a brief history of the window. By learning about the background behind this architectural necessity, you’ll be able to appreciate your windows in a whole new light.

Windows are an ancient invention.

Ancient civilizations were some of the first people to make and use windows. The ancient Egyptians, for example, built small windows in the upper rooms of their brick houses. They covered the windows with reed, which kept out heat, dust, and flies.

Meanwhile, in ancient Japan, China, and Korea, translucent paper was used for windows.

The Romans were the first to make glass windows panes.

They made glass windows as early as the 1st century. The glass panes were small and not flat or translucent. (These panes have been discovered among ancient ruins in Rome and Pompeii!)

Usually, the glass windows had frames made of bronze, but marble and shell were also used.

The rest, as they say, is history.

Up until the early 1900s, windows were made with wood.

In the mid-1800s, it was easy to find wood windows and window moldings at lumber yards. In fact, window frames were some of the first building parts to be made in factories.

By the time the 1900s rolled around, manufacturers started to use aluminum and steel for windows.

During this time, components like insulated glass units also started to make an appearance. These units were marketed as energy-saving windows that could help reduce your coal bill.

Clearly, energy efficient windows have always been in style.

Glass blocks, also known as glass bricks, were invented in the 1900s. They were used in factories to bring in natural light. But in the 1930s and ‘40s, they became extremely popular in residential homes.

(Glass blocks went out of style in the 1970, but these days, you can still find them in modern bathrooms, commercial buildings, and wall partitions.)

Prior to World War II, double-hung windows used weight and pulley systems. It consisted of two cast iron weights which equaled the weight of the window sash. This prevented the window from crashing down while opening it.

But after World War II, windows were reinvented. Not only were supplies harder to find, but it was a period of “starting over.” Eventually, windows with weight and pulley systems were replaced with spring suspension windows. Insulating glass became more available to the masses, too.

Make Your Own History with XO Windows

This brief history of the window barely scratches the surface. Yet, it reminds us that anything is possible when it comes to windows.

Let us create the windows of your dreams. From garden windows to patio doors, XO Windows can design a window that suits your lifestyle and needs. We’re happy to make specialty windows in all shapes and sizes, too.

What Are the Best Window Treatments for Sliding Glass Doors?

One of My Window Panes Is Broken, but It’s a Dual Pane Window…Do...